Hey there! I've been looking at what's coming up for the rest of 2021 and even into the next year and decided it would be good to share an update on what's coming.

The latest chapter of Aww, Feathers! is well underway. I hope you're enjoying it! This one will be relatively short compared to other chapters though, so it will be finished by the end of the year. There will be another gap between the end of this chapter and the start of the next one. As of this writing, I don't have a reliable estimate of when the next chapter will begin, as I have quite a bit of family-related business to take care of over the coming months (don't worry, it's nothing bad; we're all doing quite well). While I plan to work on the next chapter a little each day so as to keep the wheels turning, it will probably not be ready until the first quarter of next year.

This will in all likelihood be the pattern moving forward: I will work on a chapter of Aww, Feathers! and only start posting it after the whole chapter is complete. Then while that chapter is being published one page per week, I will take a small break and then begin work on the next chapter. This means there won't be any more unexpected breaks in the middle of chapters, but it does mean there will usually be at least some delay between chapters. I'll be sure to let you all know when it looks like each chapter will be finished.

It would be super if I could release every week--maybe even more than once per week--without any gap between chapters. I hope to get to that point some day, but there are just so many other life responsibilities that need to be prioritized. The good news is, I will still have content to share each week.

I have some bonus comics planned to help fill the gap between chapters that will take much less time to complete, but still be a fun interlude. Some will involve characters from Aww, Feathers! and some will feature my own family. I also plan to reformat some older comics from the archive to make them more mobile-friendly and share them to social media. (To long-time readers of the comic, don't worry; I won't do more than one old chapter at a time between new chapters.) In addition, I hope to have a few guest comics to share. Which brings me to...

I've hosted a number of Aww, Feathers! guest comic events over the years, and every time I'm always blown away by the creativity shown for each one. Now, we're going to do it again! If you're interested in creating a comic that takes place in the world of Aww, Feathers! featuring one or more of the characters from the comic, I'd love to see what you can do! Please take a look at the submission guidelines, and then plan to have your guest comic finished by the beginning of the new year. The soft deadline for submission is currently January 1, 2022. So you've got a few months to work on your creations! And if you need a little bit of practice or inspiration, I may have just the thing...

Yes, that's right! I'm once again participating in the Inktober daily drawing challenge, although like last year, I've put my own twist on it: 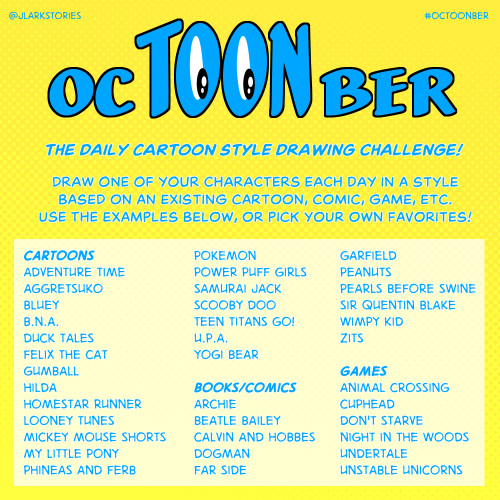 For a number of years, I've been fascinated by the simple and streamlined yet fun and endearing styles of various comics, TV shows, and games. I'd love to try a few of those styles myself, and then see what new techniques I could incorporate into my own art. If something like that tickles your fancy, feel free to join along! I didn't assign any specific cartoon style to specific days, but I did provide a list of ideas. Pick one from the list or choose from your own favorites, look up some artwork from that style, determine what makes that style unique, and then create your own drawing based on that style!

I think this will be a fun experiment! Still, I don't think I'm quite busy enough. What else can I do to kill some time...

Well, twist my arm, I guess I'll write a novel!

Joking aside, National Novel Writing Month (NaNoWriMo) has been on my radar for years now. I love telling stories, and I've loved using Aww, Feathers! as one outlet for telling those stories. And not to worry, it's not going anywhere; I still have plenty more stories to tell in that universe! But, there are also stories I want to tell that don't fit with the comic. So this year I've decided to participate in NaNoWriMo to bring one of those stories to life. I've already written about my plans for NaNoWriMo in a previous news post, but the highlights are that my plan is to write the rough draft for a 30 page graphic novel that contains a complete story, start to finish. I'll share the finished draft when it's complete, but I will also be sharing the writing and creation process with my patrons, so if you'd like to follow along that journey with me and also gain access to other patron-exclusive benefits, join my Patreon at the Awwthusiast level or above!

Phew! After all that, I will finally be taking a bit of a break just in time for the holidays! I won't be completely inactive; by that time I plan to be making incremental progress on the next chapter of Aww, Feathers! and also doing a few art commissions. Mostly though, I will be taking what I'm sure will be a well-deserved rest, spending time with family, and getting myself pumped up for a new year!

That's what I've got planned for the rest of the year. I'm sure it will be a challenge, but I'm excited to experiment with some new things, push myself, and share my creations with you all!

Posted by Joshua Whiting at 6:23 PM

A family friendly, anthropomorphic, slice-of-life webcomic that takes place in Utah Valley. "Fur, scales, fins, or feathers, everyone has a story."

A collection of doodles exploring religious, social, or just humorous observations. "Life's not always sweet, but it is worth savoring."